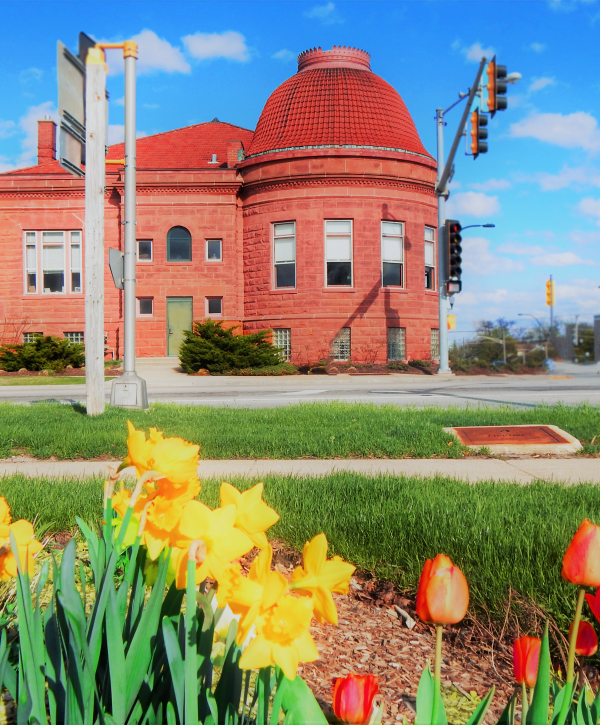 Although the Sycamore Public Library did not open its doors until 1892, we can trace its roots back to 1875 when a Chautauqua Scientific Circle was formed in Sycamore. Once members had completed the course, they established the Athena Literary Society in order to form a public library. Over the course of three years they raised $700 and asked city council to appropriate money for books and that the mayor appoint a board of directors.

City Council approved a tax and appointed a library board in May, 1891. On July 12, 1892, the Sycamore Public Library opened in Hoyt and Rogers’ Store, second floor, in the backroom. The City Council appropriated $800 to purchase books. The Athena Literary Society assisted with funding the library for the first two years. Miss Flora Jeannette Dow, a member of Athena, was the first librarian.

In 1902, Andrew Carnegie offered the City of Sycamore $10,000 for the construction of a library, provided an acceptable site could be secured and that the Sycamore City Council would annually appropriate at least 10% of his donation for maintaining the building. Mr. Frederick B. Townsend donated the property where the library stands today. Miss Dow received the honor of placing the first trowel of mortar on the cornerstone on May 24, 1905. Miss Dow was very ill and passed away in June of 1905. In early November, 1905, city council held their monthly meeting in the new library building. Their room was in the basement and fixed up with “desks of handsome oak.” The library opened to the public on Thanksgiving Day, November 30, 1905.

Over the next 90 years, several renovation and remodeling projects took place and then on October 14, 1995, a new era of growth began with the groundbreaking ceremony for the library expansion. The library grew from just over 6,000 sq. ft. of space to 21,700 sq. ft. The addition was open to the public in February 1997. The addition was planned to provide sufficient space for the next 20 years.

In 2012, the library underwent a full remodel to recreate and expand spaces for the public. This project expanded the children’s department providing appropriate spaces for preschoolers and more grown up spaces for grade school children, the teen department gained additional space for the growing collection as well as seating and room to hang out. The Adult Services Department was reorganized and new seating was added to make more room for visitors to work, study, and easily access the Internet through Wi-Fi.