DeKalb Library Presents: Space Race—Getting to the Moon, a Tale of the Cold War, Bringing Nazis to America and Cutting Corners 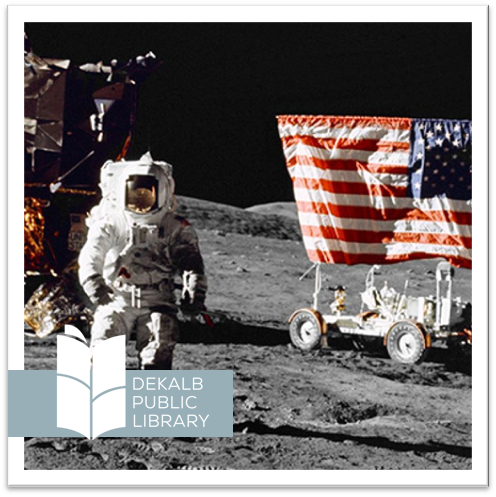 On July 20, 1969, Neil Armstrong popped up a hatch and went down a ladder. In seconds, he put his foot on the moon. It was the culmination of what President John F. Kennedy wanted in 1961. A man on the moon. But the space program’s rooted went back to World War II. America accepted German scientists and started work on a program to explore space. There were many successes and failures including the Apollo 1 spacecraft command module catching fire on the launch pad in 1967 killing three astronauts. Man would visit the moon five more times after Apollo 11. The last trek was in 1972.

Evan Weiner is a speaker, author, with a radio and TV background. In 2007, the Department of State sent him to talk to foreign nationals at the George Bush Presidential Library in College Station, Texas to speak about the politics of sports business in America. Evan started his journalism career at the age of 15 by hosting a Spring Valley High School talk show on WRKL Radio, Mount Ivy, N.Y. in 1971. He also, at the same time, was a “correspondent” covering high school sports for the Rockland Journal News, Nyack, N.Y. at the same time. By 1978, he was covering news for WGRC Radio and won two Associated Press Awards in 1978 and 1979. In the 1980s, he started his long association with Westwood One Radio. Evan was a contributing columnist for New York Newsday (2001-05); AM-New York, the New York Press, the Bergen (New Jersey) Record, the Philadelphia Metro, Washington Examiner, Orlando Sentinel, Rhode Island’s Sports Journal, and for The Chicago Tribune’s Spanish Hoy! newspapers in N.Y., Chicago and LA.

This virtual event is free and open to all ages. Click here to register.